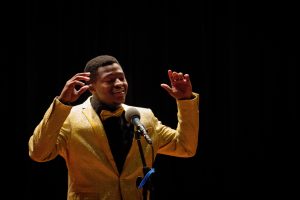 CLC Hosts Battle of the Talents

The purpose of the show was to raise 13000 items for the food pantry. Caleb Cache kicked off the show singing Whitney Houston’s “I Have Nothing.” He was followed by Dako, who performed magic and shocked the audience when his tricks were unveiled. Lauren Black sang, succeeded by a sign language song performance by Alanis Bradley. Next was a group song performance by Joshua Gregory, Camerone Bone, and Danyelle, and an individual song by Favi Alba. Kammi Shae Ward closed the show with spoken word. Between performances, emcees Emma Guerra and Shane Johnson engaged with the judges and the audience to keep everyone entertained.

This aspect of the show was Charlee McCall’s favorite part.

The audience interaction was lit,” she said.

One member of the audience was so enthusiastic that organizers were inspired to create a new award, Most Hyped Audience Member, during the event to be presented at the end specifically to Makira Hines, who received $20.

In the end, Cache was named the winner by judges Katie Zakrzewski, Amanda Dreyer, and Brittany Fugate. Cache, the recipient of a $50 prize said.

“Winning felt amazing,” he said. “Honestly I didn’t do it for the money, I did it for my singing and hopefully someone’s day was made better by my singing.”

Event organizer Becca Davis was proud of her event’s success.

“This is my sixth year participating and being a part of Battle of the Talent’s creation and I’m so excited because every year, the acts get better and better,” she said. 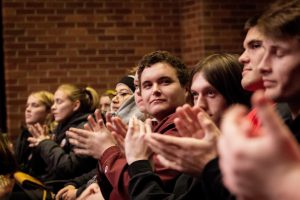